The FORCE is strong with the team in Taunton 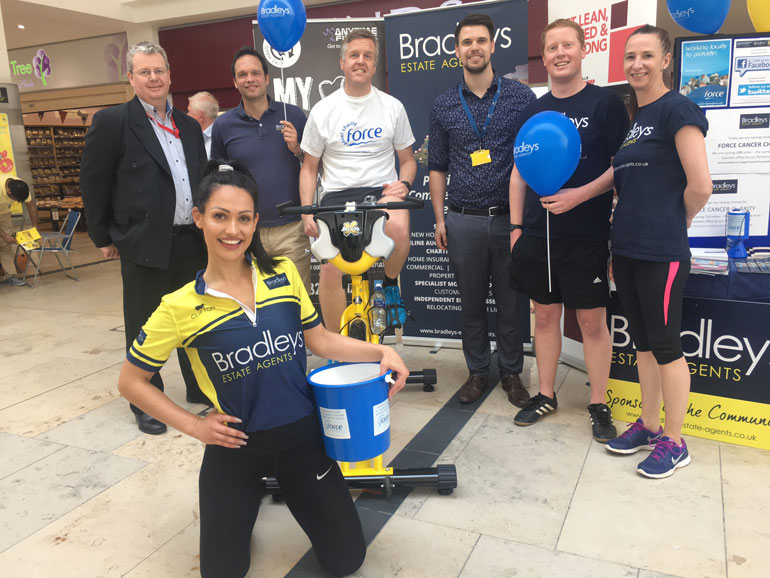 After several weeks of brainstorming and then planning, the team in our Taunton office completed a very successful virtual cycle ride thanks to the generosity of Taunton shoppers.

Having decided that a cycling event would be a challenge for the whole team it was new local gymnasium, Anytime Fitness, that came to the rescue when they generously offered the team to use a spinning bike from their gym just around the corner. The arrangements were put in place, the busy Orchard Shopping Centre was booked for the day and it was decided the teams challenge was to cycle the distance from Taunton to Penzance, which is of course the geographical coverage area of our 33 office network.

FORCE believes that anyone diagnosed with cancer deserves the best possible treatment and professional support close to home. 2017 marks the 30th anniversary of this highly respected West Country organisation. In 2004 the charity opened a Cancer Support and Information Centre in the grounds of the Royal Devon & Exeter Hospital. The Centre is open every weekday for people needing physical, emotional, psychological and practical support at a difficult time in their lives. All of the charity’s services are free of charge and whilst based in Exeter offer support throughout the region.

Branch Manager, Jack Battersby, commented “When I calculated the route was 150 miles, I really thought we may struggle to achieve that in a day but the effort from my team was fantastic. We were helped out by some other staff from around the Bradleys Group which was very welcome and overall it was a true Team Bradleys effort.”

After just over 8 hours in the saddle, the 150 mile mark was reached and a very hot and tired team cheered with joy. Jack went on to say “We are amazed at the support from the public today with so many people having stopped to talk to us, show us support and donate money as well.

With visits from Ashfords Solicitors dropping off some much needed cookies, cakes and water and to some of the Avon and Somerset Constabulary stopping by to cheer us on. I am delighted to announce a total of £274.50 was raised up to and including the day, although we continue to receive donations via our justigiving page so please feel free to donate here