Q&A with Bradleys own Lewis Rossiter 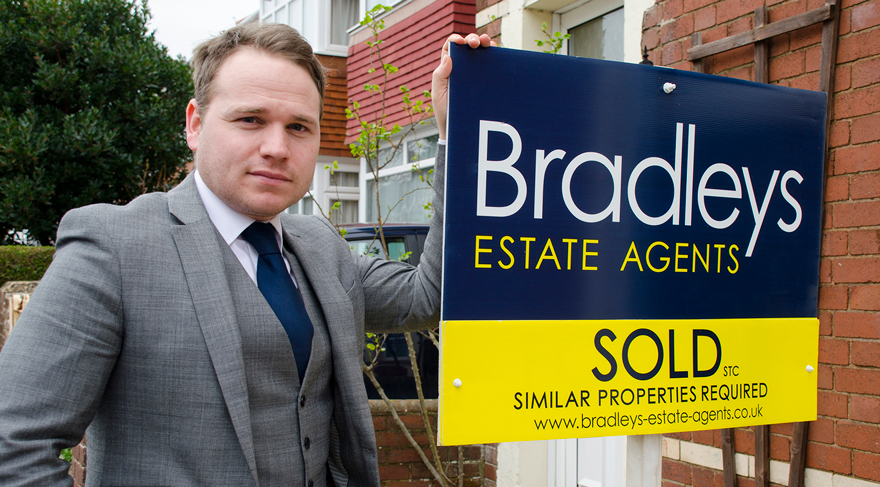 Tonight, Wednesday 9th April sees the first airing of “Under Offer, Estate Agents on the Job” This is a six part series which follows 11 estate agents over a 6 month period and shows the trials and tribulations along the way. The agents were I believe chosen for their diverse market places and interesting character which when put together in one program gives a fair, whilst entertaining impression of the industry as a whole.

Writing as the Managing Director of one of the firms featured quite heavily in the series I thought this would be a good time to give a little background into what has been going on here at Bradleys and how we came to be involved and then give an insight into the real Lewis Rossiter who is one of the main characters in the form of an interview with the star himself.

I was first contacted by Betty Productions in early 2013. Betty has made other successful property related programs in the past so I listened to what they had to say. They were competing with other production companies to produce this program for the BBC. They were looking for a company with good coverage of a large sector of the market and a sizeable amount of staff where some interesting characters could be identified. Bradleys seemed to fit their bill exactly.

Having listened to what they wanted and satisfied myself it wasn’t going to be a stitch up like the last documentary on estate agents I suggested a few interesting characters involved in their own story as well as the day job. Betty liked the sound of Lewis the most and came to Exeter to carry out a screen test. At this stage Betty still hadn’t won the contract to produce the program for the BBC so Lewis contributed to their success in securing the contract for them.

The cameras followed Lewis for six months and I gave them full access to all of Bradleys meetings and social functions in addition to the daily routines in one of our Exeter offices. At this point I had signed away all editorial control of what was used or discarded so I had to be confident that everything would be up to our normal high standard and that we would avoid any embarrassing incidents.

So that is how Bradleys became involved. Below is an exclusive interview for the Bradleys Blog with Lewis Rossiter, the star of the show for an insight into the person and his life on and off camera.

Q. When being filmed was first put to you how did you feel?
A. It was a mixture of excitement and trepidation. I really wanted to do the series, but was very aware that it was a big risk in terms of how I could be portrayed and in turn could be detrimental to Bradleys.

Q. Were you worried at any time you might slip up and say or do something detrimental on National TV?
A. All the time! However, as time went on the guard came down and felt more relaxed and less self-aware. Ultimately, I made a conscious decision to just be myself and let the chips fall where they may.

Q. Did you have any concerns about dealing with any customers that might be unhappy and have to do that on National TV?
A. Not really, I am very proud of my allAgents reviews and current top ten ranking which proves that I deliver the very highest standard of customer care. I work for a company, which above all else puts customer’s needs first so unhappy customers are fortunately very rare.

Q. How did the rest of your team and family feel about you opening yourself up to the whole country and potentially impacting on them as well?
A. I think the team found it overwhelming and stressful, but I never gave them the chance to opt out. In terms of my family, my Wife was adamant she did not want to be filmed and I just told her she was Jools Oliver and would be in the background.

Q. What are you hoping will be the effect on your business career of this program?
A. They say there is no such thing as bad publicity. I hope I come across hardworking and dedicated to what I do, but also I hope it reflects well on Bradleys. I have had a fantastic two years with Bradleys and I am looking forward to a long career with them.

Q. So if the people of Exeter like what they see on TV, will you be able to cope with the demands of the extra business?
A. Without a doubt. Bradleys have supplied me with additional staff to be ready for the increase. I do believe that once people who are on the market with some other agents see what they are missing they will hopefully give me a call. We get properties sold in a timely manner and treat vendors and buyers the way we would wanted be treated ourselves.

Q. Now the cameras have gone your life is still being affected now by the considerable demands of PR attached to the program, how do you cope with those extra pressures and keep your office running successfully?
A. It is all diary management and delegation. I have a great team I can rely on and I am making sure everything urgent is being dealt with and taking precedence.

Q. You are a guest on the “One Show” tonight, that is fairly celebrity, How does that make you feel?
A. People have asked me if I feel nervous. At the moment I am just really looking forward to my first experience on live TV and not overthinking it.

Q. The question everyone will want to know the answer to is. Once these 6 weeks are over will you enjoy your life returning to normal or would you like to see a second series?
A. We have had an absolute blast filming and it has been an amazing experience. I would be lying if I said I would not be interested in being involved in a second series, but that is something out of my control.

Thank you for your time and good luck on tonight’s One Show, There will be 190 Bradleys Estate Agents all watching you along with most of Exeter.